'Feed the hungry and help those in trouble; then your light will shine...' Isaiah 58:10 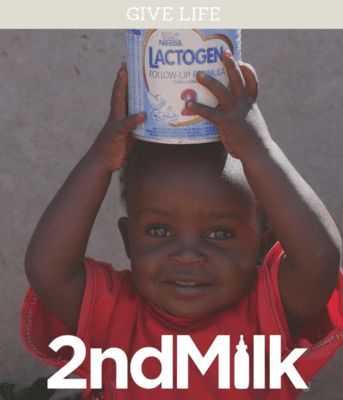 For 2nd Milk founders Jason and Lacey Carney, answering God’s call led them 9,000 miles away from their hometown in Springdale, Arkansas to Malawi, Africa. The Carney’s were living in Malawi with their six children when God planted the idea for 2nd Milk in their hearts. Living next to a hospital, the Carneys witnessed firsthand babies dying at an alarmingly high rate. They quickly realized that infant mortality was closely linked to nutrition deficiency. Too often, mothers were unable to breastfeed or babies were orphaned, resulting in babies dying from lack of nourishment. Seeing this, Jason and Lacey felt called to found 2ndMilk in 2013, a nonprofit which provides baby formula for malnourished babies facing immediate starvation and death.

A decision of faith

Before devoting their lives to 2nd Milk, Jason and Lacey Carney had a stable life in Arkansas. Jason worked in sales, and the family ran and owned a cupcake shop. “We quit our jobs, sold the business, and made the trek to Malawi, not really knowing what to expect,” he said. The Carneys poured their entire savings into the nonprofit, choosing to walk in faith and rely completely on God.

The Carneys’s commitment to carrying out God’s plan in Malawi did not come without discouragement and dissuasion. Jason recalls meeting with other organizations in Malawi who said providing nutrition for malnourished babies was “just too hard and too expensive.” Undeterred and standing on faith, Carney responded, “We don’t find anything in scripture that says, “Do everything for the Kingdom unless it’s ‘too hard’ or ‘too expensive.’”

Even now, after seven successful years, Jason and Lacey are frequently asked ‘Why 2nd Milk? Why you? Why Malawi?’ Lacey has a simple answer: “Why not there? Why not us? If we hadn’t answered God’s call, it would be someone. I fight for 2nd Milk because it’s the ministry that God gave us to facilitate.”

There’s no doubt that God is working through 2nd Milk. Since its founding in 2013, 2nd Milk has provided over 3 million bottles of formula to over 900 babies in over 100 villages. Many of these villages are in Malawi, but 2nd Milk also has smaller operations in Ghana, Kenya, and Uganda. Through sponsorships, 2nd Milk supplies baby formula for babies up to two years old. Aside from just providing formula, 2nd Milk also holds educational sessions for families to ensure they know how to mix the formula and sterilize bottles.

2nd Milk is currently the only organization in Malawi providing formula and nutrition for malnourished babies. 2nd Milk also stands out from other organizations because they continue to provide for children even after age two. They partner with other organizations to feed children for three more years so that by the time children reach age five, they are psychologically, emotionally, and physically healthy.

In addition to providing for physical needs, 2nd Milk is centered around sharing the Gospel. The organization operates with a deep understanding that God’s Word is spiritual food, a source of substance just as important as physical food. After babies reach five years old, 2nd Milk sponsors a private Christian education for each child. They also have eight staff members who meet with families in the villages to disciple, share the Gospel, and supply Bibles.

Jason, who was adopted into a Christian family as a baby, feels fortunate that the Gospel was ingrained in his heart from such a young age. “I want to replicate that for these children,” he said.

After providing over 2 million bottles of formula throughout Africa, 2nd Milk continues to strive towards financial sustainability. The creation of their poultry project in Malawi, which involves raising and selling chickens, is providing jobs for local villagers, and helping produce a sustainable income for 2nd Milk. These funds are used to purchase formula for unsponsored babies and to send these children to Christian schools. Please pray that God opens additional doors for complete financial sustainability as He continues his amazing work through 2nd Milk.

“Truly I tell you, whatever you did for one of the least of these brothers and sisters of mine, you did for me!” Matthew 25:40

Posted in Stories of God at Work and tagged feeding babies, sharing the Gospel, Why Not Us?
← In Word & Deed – ACTS Homeless Ministry (Mesa, AZ)We Speak Life – an evangelistic outreach CD →